At the beginning of the 1950s there was a lively debate in Europe about the headquarters of the future European institutions. Numerous existing cities applied, including Saarbrücken, The Hague and Brussels. Another approach was taken by a French painter and a German journalist: A new capital for which the name "White Castle - Bourg Blanc" was proposed.

Their idea was born immediately after the Second World War, after fate had let their paths cross under dramatic circumstances. They decided to give the unifying Europe a capital in the city of Wissembourg and to create a meeting place for young Europeans. 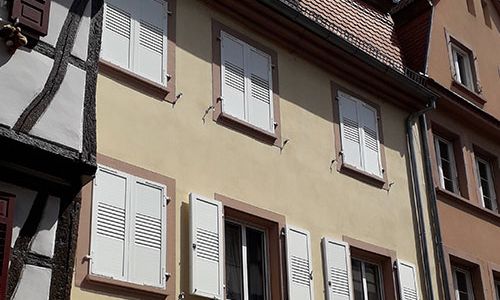 "Because it is located in the heart of Europe, at the fate frontier of the continent, as a scene of old hostilities and new brotherhood. A thousand years ago, Wissembourg was an immunity between the rival powers. In the Middle Ages it was a place of care for the oriental spirit. Its name and emblem symbolize its mission as a mediator and link. Westwall and Maginot Line, the last architectural monuments of the European Brother Twist, have excluded Wissembourg, as if the peaceful destiny of this area should be affirmed for a better future."